Language is a reflection of the way people think about the world, as determined by the linguistic society in which it is spoken.

There is the idea that the so-called world is the only one. The word “unique” in this context means that no one can change it, that is, to believe in the existence of a so-called pure, objective world. But there must be a lot of doubt in our minds as to whether such a world really exists. When we speak Japanese, for example, are we not looking at the world from a Japanese perspective?

First of all, from the point of view of vocabulary, the naming of things reflects the way of thinking of the people who use the language to see the world.

For example, it is said that the Eskimo language pays close attention to the nuances of snow and uses completely different words to express the various states of snow. In addition, languages that name various parts of cattle, such as English, distinguish between neck, rib, shoulder, brisket, hard pancetta, belly, and upper loin, showing that the language cares about beef in a very different way. In contrast, the Japanese language is not interested in these distinctions, and the name beef (ぎゅう), which corresponds to the animal name of a cow (うし), was used only after the Meiji era. However, on the other hand, the Japanese name for mullet is very detailed, corresponding to the different growth stages of mullet; in Hamana Lake, there are such distinctions as キララ, オボコ, イナ, ニサイ, ボラ, トド. The name of the fish that changes with the different stages of growth is the so-called “emergent fish.” This shows that there is a great density of knowledge about this kind of fish in Japan; that is to say, there is a great deal of insight into the world, and even if there is a subtle difference, it seems to be unsatisfactory if you do not distinguish it by name.

In contrast, native Japanese speakers see the world in Japanese. For example, the rainbow appears to native speakers as seven colors precisely because the Japanese divides the spectrum of the rainbow into seven colors and gives each color a name. If there is a language that distinguishes and names it into five segments, then the same rainbow must appear to that speaker as five colors.

However, there are also cases where people increasingly think other people’s “colored glasses” are more advanced. For example, many people think that Japanese is not logical because its grammar needs to differentiate between singular and plural. However, is it that good to distinguish between singular and plural languages? Just as many people associate cheap glasses with low quality, this needs to be more accurate. It is more important to think outside the box and let the broader information discern for ourselves.
Image by Ana_J from Pixabay 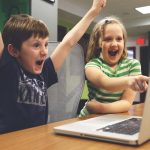 School readiness: what soft skills contribute the most?Articles
We use cookies to ensure that we give you the best experience on our website. If you continue to use this site we will assume that you are happy with it.OkPrivacy policy